CHARYA: THE TANTRIC MUSICAL TRADITION OF THE KATHMANDU VALLEY 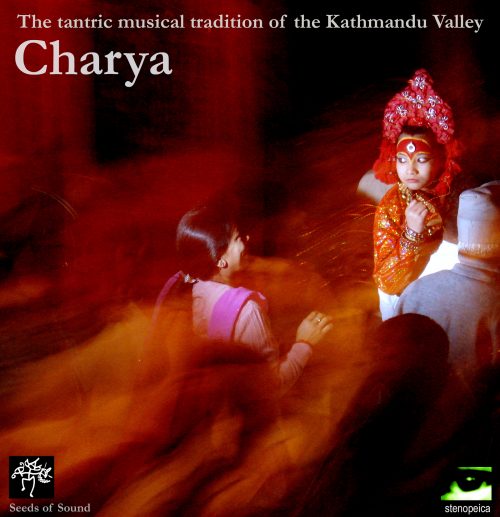 This outstanding CD presents a wide overview of charya, one of the lesser known sacred musical traditions of the Kathmandu valley.

Traditionally performed by initiated dancers in a highly secret context, these dances represent an authentic form of dynamic meditation (sadhana). Founded on the practice of specific mental visualisations and on a deep identification of the dancer with the specific meditation deity (yidam) evoked during the dance, charya nrtya’s main aim is to achieve higher states of consciousness and a direct realisation of the ultimate, non-dual and empty nature of phenomena.

In this sense, the peaceful and wrathful deities evoked and “danced” during the performance – belonging to both Buddhist and Hindu traditional pantheons – represent the direct personified expression of the ceaseless creative energy inherent in the Emptiness itself (sunyata).

In this context, thanks to the magic power of the chant, the music and the dance, each performance is thus transformed into a veritable yogic practice aimed at propitiating the tangible manifestation of the most profound divine powers that inhabit and vivify the universe, as well as providing the dancer with a rare opportunity of realising directly the enlightened condition of his/her own mind.

Kept secret until a few decades ago, only recently have carya songs and the charya nrtya dance tradition been made accessible to a non-initiated audience, including westerners.

The CD, recorded in Kathmandu under the supervision of Dr. Martino Nicoletti, has been created thanks to the collaboration of Rameshwor Maharjan, an internationally renowned Newari charya dancer and musician.

Track 1: Sri Padma Nrtyasvara Vandana: hymn to the Lord of the Dance;

Track 2: Sodasa Lasya: the dance of the Sixteen Offering Goddesses to the main deity of the mandala;

Track 3: Arya Tara: the dance of the Green Tara;

Track 4: Vajrayogini: the dance of Vajravarahi, “The Diamond Sow”;

Track 5: Manjusri: the dance of the Bodhisattva Manjusri;

Track 6: Panca Buddha: the dance of the Five Buddhas;

Track 7: Kumari: the dance of the virgin goddess Kumari;

Track 8: Rakta Ganesh: the dance of the Red Ganesh;

Track 9: Sri Bhairav Kali: the dance of Bhairav and Kali;

track of the cd

Music
Music by Seeds of Sound