SHAMANS OF THE EAST

SHAMANS OF THE EAST: RITUAL SONGS OF THE HIMALAYAN KULUNG SHAMANIC TRADITION 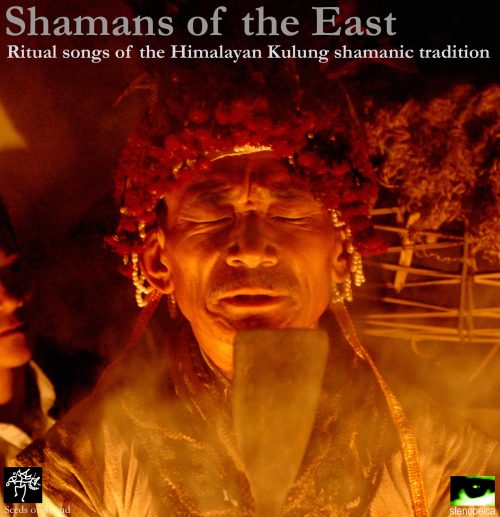 The CD presents two of the most characteristic liturgical songs still widespread in the shamanic tradition of the Kulung Tibeto-Burman minority of eastern Nepal.

The first is an invocation of the shaman’s guardian spirits and guiding deities. Usually performed in the Nepali language at the beginning of each ecstatic Kulung shamanic séance, the song, in mentioning a vast host of invisible beings relating to specific cosmic regions (sky, earth, underworld) or places of the natural habitat (snowy mountains, wood, lakes, etc), is believed to possess the singular faculty of creating an invisible bridge between the officiant and the invisible world as well as helping the shaman himself in inducing a specific form of trance. This trance is a distinctive feature of any Kulunge shamanic ritual, and the efficacy of any séance is firmly rooted in the shaman’s ability to produce, control and direct it toward the specific goals of the rite.

The second track is a hunting chant, usually performed in the ritual Kulung language on the occasion of the ritual offering of game to the tribe’s ancestors and the invisible spirit of the forest.

Settled in one of the most remote and enchanting regions of eastern Nepal, the Kulung are one of the last Himalayan ethnic groups to hand down, even today, an archaic form of hunting of specific species of wild quadrupeds in the form of a complex and highly ritualised practice.

According to Kulung tradition, the hunting expedition is preceded, accompanied and followed by various liturgical songs – sung in a sacred and secret ritual language – believed to possess the power of ingratiating the invisible entities of the wilderness, propitiating the hunt and facilitating the obtainment of an “invisible essence” (ji), hidden in the thick of the forest, on which the prosperity of the village is deemed to depend, as well as the vital force and health of its people.

A recurrent theme of these songs is the account of the mythical hunt for an invisible archetypal stag and the description of the mystic journey accomplished by the souls of the hunters – here acting in a double role as huntsmen and priests – in search of prosperity and invisible strength. Both these qualities are concealed in specific “power sources” spread throughout the forest where the hunt takes place and scattered over the its studded mountain peaks.

The songs on this CD are superbly performed by Mekhe Kulung, one of the most renowned contemporary shamans of the Kulung tribe.

tracks of the CD

Music
Music by Seeds of Sound